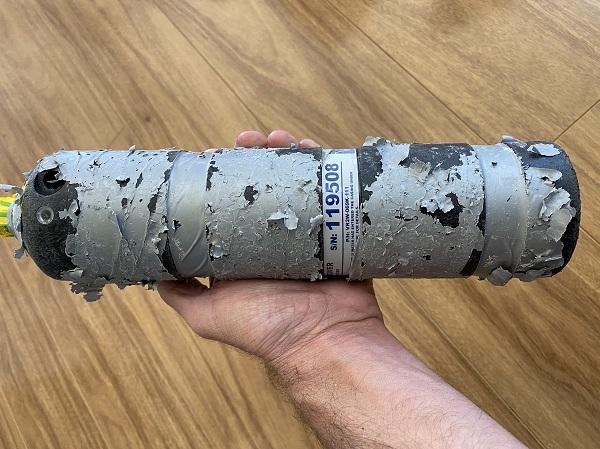 ​Following the weekend’s wild weather, which is continuing today, the oceans along our coastline are likely to wash up some intriguing items and we hope it’s not any of the technology used to record or monitor tagged shark activity in Western Australian waters.

The Department of Primary Industries and Regional Development (DPIRD) is calling on beachcombers, in the State’s South West particularly, to report any stray black cylindrical containers, which may be a data-recording VR2 receiver potentially dislodged from its sea bed moorings in extreme weather conditions.

More than 200 data-recording receivers form part of WA’s scientific trial of non-lethal SMART drumlines that are used to track the movement of tagged sharks.

In the Capes region, the receivers are secured to the sea bed off Gracetown around the SMART drumline trial area and near other known surf breaks including Three Bears, Windmills, Injidup, Yallingup and Prevelly.

The receivers are designed to capture and store data on the movements of acoustically tagged sharks as part of the trial.

DPIRD project manager Brett Hopley said occasionally, in extreme weather events, the receivers could break free of their moorings and be washed ashore.

“We encourage anyone who finds a data-recording receiver to call the Department of Primary Industries and Regional Development on 1300 374 731 (1300 DPIRD1) or email sharksmart@dpird.wa.gov.au so we can arrange to collect it,” Mr Hopley said.

“Data from these receivers, along with information from the pop-up satellite archival tags, will be provided to WA’s Chief Scientist to enable a science-based assessment of the potential application of SMART drumlines in Western Australia.”

The daily SMART drumline trial operations can be followed on the Shark Activity Map on the SharkSmart website or via the SharkSmart WA app - highly useful tools implemented as part of Western Australia’s comprehensive shark mitigation strategy.

And, for more information on the trial’s objectives and progress reports go to https://www.sharksmart.com.au/research/smart-drumline-trial/