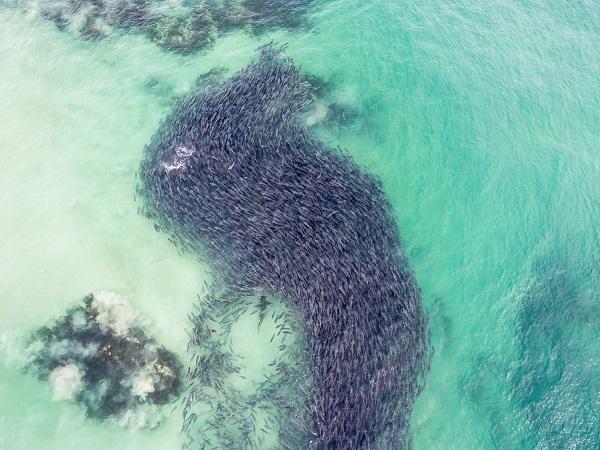 With school holidays fast approaching and Easter on the way, there’ll be many families making getaways this April in Western Australia.

If you or your loved ones are heading for coastal areas, please make sure everyone switches on their Sea Sense when they head to the beach.

It’s also handy to have your SharkSmart WA app with you, so you can access shark sighting reports or tagged shark detections for the beach you’re visiting. There’ve been more than 92,000 downloads to date, so tens of thousands of WA beachgoers already find the app useful.

The SharkSmart WA app also has a quick link to call Water Police on 9442 8600 to report any shark sightings. Keeping Water Police informed is your effort to help others stay safe.

April on WA’s South Coast and along the South West Coast means there can be large schools of Australian salmon chasing baitfish close to shore and potentially larger predators following the salmon, so keeping away from large schools of fish is a key Sea Sense tip.

Salmon aggregations are a known attractant to sharks, so they may be present closer to shore during the annual salmon run and recreational fishers are encouraged to bleed their catches away from the water’s edge and to discard fish waste responsibly and well away from swimmers and other water users.

Department of Primary Industries and Regional Development Shark Operations Manager Dean Clarke said remembering to stay safe in the ocean has always been the best advice.

“Surfers and divers are also urged to protect themselves with a personal shark deterrent device,” Mr Clarke said, “and WA residents have access to a $200 rebate to purchase an approved device under a world first subsidy program.

“If you haven’t already received a rebate, there are now three eligible devices that have been scientifically proven to reduce your risk of interaction with a white shark.

“The aerial shark patrols by Surf Life Saving WA (SLSWA) will be operating daily during the school holidays and over Easter to watch over Perth metro and popular South West beaches.

“At locations with no beach patrol services, follow the direction of the SLSWA Westpac Life Saver Rescue Helicopter when its alarm siren has sounded. This means they’ve spotted a potential shark threat. Leave the water immediately.

“Before entering the water, always check your SharkSmart WA app, the SharkSmart website or the SLSWA Twitter service for shark activity information, including reports from aerial patrols.”