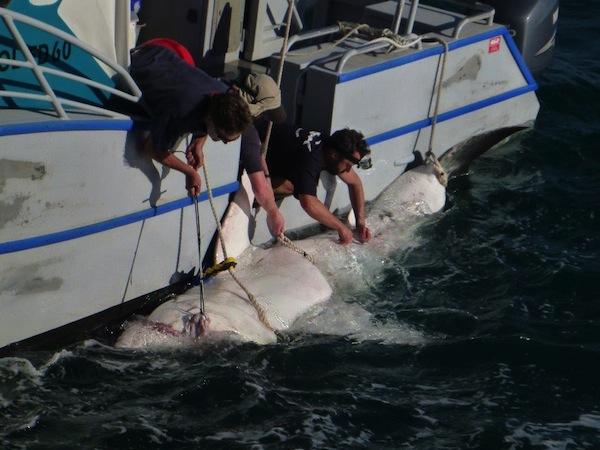 The Department of Primary Industries and Regional Development (DPIRD) has a dedicated shark tagging program to support the Shark Monitoring Network.

Acoustically tagged bronze, tiger and white sharks may trigger a near real-time alert through one of the shark monitoring receivers, notifying the public, land managers and relevant authorities of a potential shark hazard.

In Western Australia, researchers have had the most success tagging white sharks when they have been found scavenging on a floating whale carcass, or when around schooling fish such as snapper, off the metropolitan coast.

DPIRD researchers aim to capture sharks to internally implant tags, which allow a shark to be detected for up to ten years.

Sharks are fitted with acoustic tags that emit a sequence of low frequency ‘clicks’ which give each tag an audible ID number. These unique signals can be detected and recorded when the shark swims within range of the shark monitoring receivers.

To capture a shark a single baited hook is suspended from a large, anchored buoy that is monitored continuously.

When safe to do so, experienced research staff secure the shark with suspension ropes and carefully roll the shark onto its back, putting it into a sleep-like state known as ‘tonic immobility’.

A small incision is then made in the shark’s abdomen, the tag inserted into the body cavity and the incision closed with a few stitches.  At the completion of the minor surgery the shark is rolled over. Even though the process only takes a few minutes, great care is taken to keep the shark’s head and gills in the water so that it can continue to breathe during the procedure.

A plastic identification tag is attached to the dorsal fin as a visual record that the shark has been internally tagged. Details about the shark are recorded such as species, sex, length and a genetic sample is taken.

Once the tagging process is complete, lines are carefully removed and the shark is released.