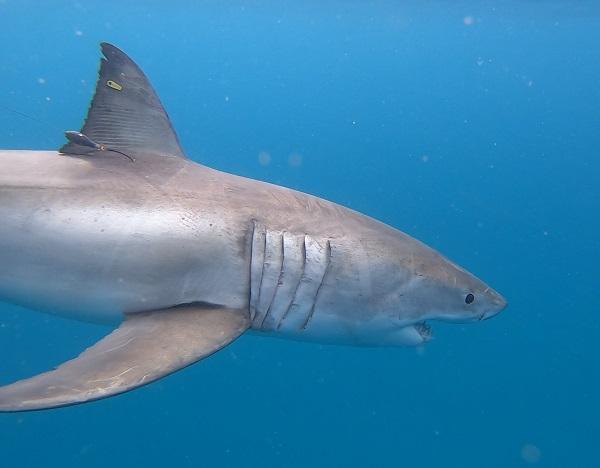 A Department of Primary Industries and Regional Development (DPIRD) crew have caught and tagged another six white sharks in recent weeks, taking the State's total to 115 - 54 of which have been tagged in the past four years.

The tagging program is a regular feature of DPIRD staff managing fisheries along Western Australia's West, South-West and southern coasts.

Whale carcasses attract sharks and offer opportunities for tagging, although weather and other environmental conditions must be right to undertake the highly specialised work.

During the Yeagarup Beach operation, the specialist DPIRD crew tagged a 4.1m white shark and another measuring 3.5m in just over an hour. The following day, when they returned to the site, they tagged a 3.8m white shark.

Three smaller white sharks, between 1.75m and 3.2m, were also tagged at the site about a week later.

The operation followed earlier tagging of four white sharks in the Recherche Archipelago off the Esperance coast ranging 1.9m to 3.5m in size. In total, 10 white sharks have been tagged to date in 2020.

In 2019, 15 white sharks between 2.3m and 3.75m were tagged - seven off Garden Island, five around Esperance and three near Albany.

Tagging occurs each year near Garden Island, when white sharks are attracted to snapper aggregations, but targeted tagging, which is a separate activity to the tagging undertaken in the SMART Drumline Trial (SDT), can occur anytime conditions are right.

Key findings from the first 12 months of SDT data have revealed the post-capture movements of the two white sharks tagged and released during the initial trial.

After their capture and tagging, both sharks were relocated offshore and stayed offshore for a significant period of time.

The trial also demonstrated that SMART drumline methods are effective in WA's Capes area - a high-energy coastal environment that, typically, has white sharks much bigger than those in the NSW SMART drumline program.

Other species of sharks caught during the trial were released in good condition, there were no shark mortalities and the contractor averaged a response time of approximately 11 minutes to a hooked animal.

WA's Chief Scientist Peter Klinken, who provided an independent review of the trial data, recommended extending the trial for at least 12 months to collect more information about WA's shark populations.

The report is at http://www.fish.wa.gov.au/Documents/occasional_publications/fop139.pdf

"This monitoring network lets beach users in the Perth metropolitan area, the South-West region and around Albany and Esperance know when a tagged shark is near one of the satellite-linked receivers.

"When a receiver is triggered, it automatically sends a close to real time alert through the SharkSmart website, Surf Life Saving's Twitter and the SharkSmart WA app.

"With these and the other resources deployed to keep ocean users informed, WA has one of the most comprehensive shark mitigation strategies in the world."

"During the first 12 months, the SMART drumlines caught two white sharks - the target species - and 146 non-target sharks such as tiger sharks and bronze whalers.

"Findings from the SMART drumline trail (SDT) show that captured white sharks, once tagged and released, remain offshore for significant periods of time and indicates further investigation of this technology in a WA context is warranted.

"Extending the SDT to collect more data about both target and non-target species will enable a more rigorous evaluation about the technology's effectiveness and help us to reduce the risk of white shark attacks."