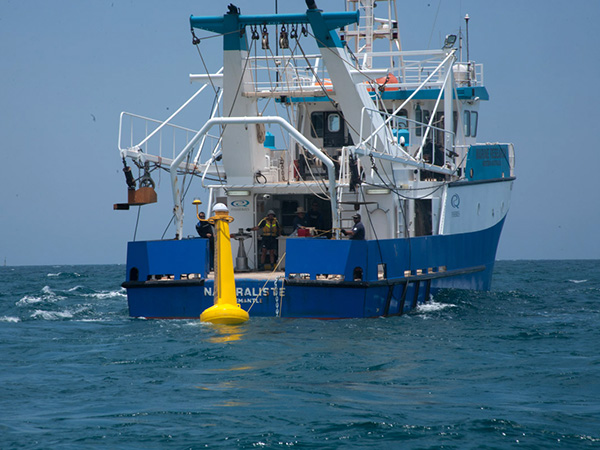 A satellite-linked shark monitor has been installed near the Busselton Jetty today and activated ready to detect any tagged sharks that may pass by the area.

The deployment is part of the expansion of the Department of Fisheries’ world-class network that provides both public safety and research benefits.

It follows the installation of two new monitors at Albany last month, an additional monitor coming online off Perth’s coast in November and the October deployments off Bunbury and Meelup.

Shark Monitoring Network Project Manager Mark Kleeman said the new monitor near the Busselton Jetty would allow beach safety authorities to know, through near real-time alerts, if a tagged shark was in the vicinity.

“Expansion of the satellite-linked network is part of a long-term project to improve safety at West Australian beaches, which will also help scientists better understand the movements of tagged sharks through WA waters.” Mr Kleeman said.

Along with the satellite-linked monitors, there are also approximately 320 seabed monitors located around the South and West coasts that can record movements of tagged sharks.

Mr Kleeman said each time data was physically retrieved from those monitors it would also help to establish a much broader understanding of shark behaviour and movement in WA waters.

“338 sharks have now been tagged for the ongoing Shark Monitoring Network project and the ongoing tagging program will continue to help provide even more data,” he said.

“The satellite-linked and seabed monitors detect only tagged sharks within a specified radius, so sighting reports from members of the public also play a vital part in coastal safety.”

The Surf Life Saving WA (SLSWA) Twitter feed at twitter.com/slswa is the best way to keep up-to-date with any detection of tagged sharks, by the State Government’s Shark Monitoring Network, as well as any sightings reported by members of the community to Water Police.

This information is also available on the SLSWA website at www.surflifesavingwa.com.au and via a link on the Department of Fisheries’ website shark pages at www.fish.wa.gov.au/shark.