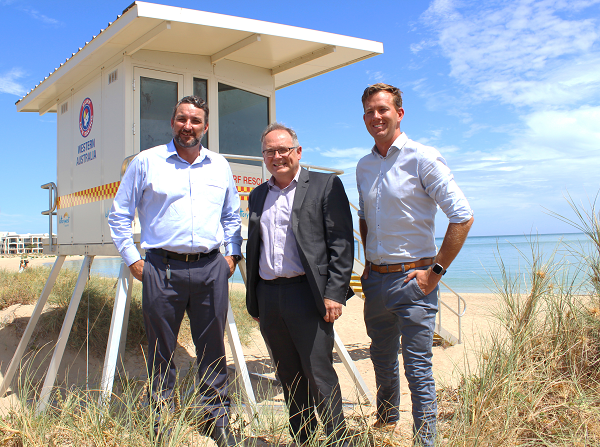 The McGowan Government has put $287,000 towards supporting a $553,329 contract to trial the beach safety services which, starting on Monday (January 20), will cover the cost of lifesaving patrols, with options for additional services such as jet ski and inflatable rescue boat services.

Last year, the Government agreed to a request from the City of Mandurah, for funds originally allocated for a beach enclosure at Falcon, to be used for community-preferred lifesaving services at its popular beaches.

Mandurah's community already has a keen Sea Sense, being one of the top locations where surfers and divers have claimed the McGowan Government's world-first $200 rebate to buy scientifically proven personal shark deterrent devices.

The new SharkSmart WA app is also popular, with more than 17,000 downloads. The free app helps people switch on their Sea Sense when they head to our beaches this summer.

Find out more information at www.sharksmart.com.au/staying-safe/sea-sense.

"I congratulate Mandurah on its plan for three years of beach patrols that will support its community and provide lifesavers at four locations.

"Patrols will operate at Pyramids, Falcon Bay and San Remo, as well as Town Beach, until mid-April. The lifesaving services trial will be assessed annually over three years.

"Mandurah also initiated installation of Beach Emergency Number signs, since developed by the McGowan Government and offered to coastal councils from the Mid-West to Esperance.

"Collectively almost 900 BEN signs are now installed, covering 820 coastal locations, with unique codes for emergency services to pinpoint the locations in an emergency."