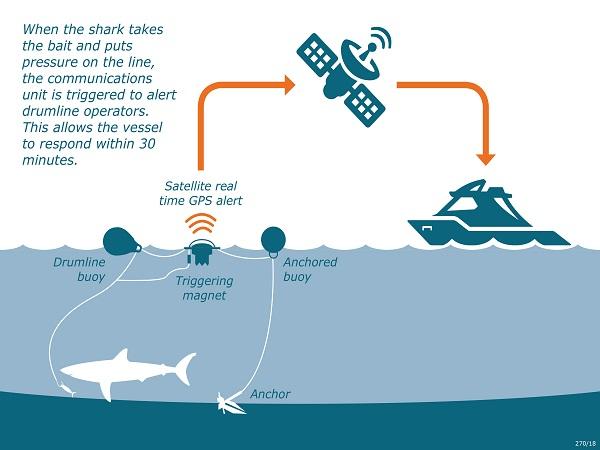 Ten non-lethal SMART drumlines will be deployed about 500 metres offshore along an 11.5 kilometre stretch of coast in the Gracetown area, as part of a trial to determine the technology’s effectiveness in reducing shark attacks in Western Australia.

In September, a consultation process was launched, providing community members with the chance to have their say on two potential design options for the non-lethal trial. These options were developed by the Department of Primary Industries and Regional Development.

Community consultation found that 57 per cent of the 161 respondents preferred the selected trial design over an alternative of 12 non-lethal SMART drumlines clustered in groups of three off Gracetown.

A reference group of key stakeholders formed by the Minister for Fisheries, which includes representatives of Sea Shepherd, the Conservation Council WA, Surfing WA, the Shire of Augusta-Margaret River and Surf Life Saving WA, is also supportive of the trial design.

Public consultation also showed overwhelming community backing for the McGowan Government’s decision to extend the Shark Monitoring Network to the Gracetown area. Two receivers will be deployed at Cowaramup Bay and a third receiver will be installed at popular surf break Lefthanders, south of Gracetown.

The three new satellite-linked receivers will cost approximately $200,000 and arrangements are on track to install them by mid-December, to provide coverage during the busy Christmas holiday period. This will take the number of receivers in WA’s Shark Monitoring Network to 30.

These receivers will detect tagged sharks within their vicinity and provide real-time information to authorities and ocean users, so they can make informed decisions before entering the water. This information is uploaded to the Sharksmart.com.au activity map and the Surf Life Saving WA Twitter feed.

A public tender will soon be undertaken to select a contractor for the non-lethal SMART drumline trial, and costs of the trial will be known when this tender process is complete.

“I thank the community and the reference group for engaging in a constructive conversation about this non-lethal trial.

“Unlike the previous government with their shark cull, we have been transparent and open to community feedback. We will continue to be transparent about the trial implementation by working with the reference group.

“Department scientists are finalising the details of the scientific trial, with advice from the Chief Scientist, before its anticipated start early next year.

“I want to have the trial up and running as soon as possible, but not at the expense of doing it right.

“The extension of the Shark Monitoring Network off Gracetown is something the previous Liberal National Government failed to do in more than eight years, despite two fatalities in the area since 2010.”